A couple of days ago I learned that in 1860 Green-Wood Cemetery in Brooklyn attracted 500,000 visitors, rivaling Niagara Falls as America’s greatest tourist destination.  This monumental 478 acre cemetery is home to 560,000 graves including that of Leonard Bernstein, Jean-Michel Basquiat, Louis Comfort Tiffany, Boss Tweed and many other illustrious artists, politicians and inventors. It’s also an amazing place to practice Chod. 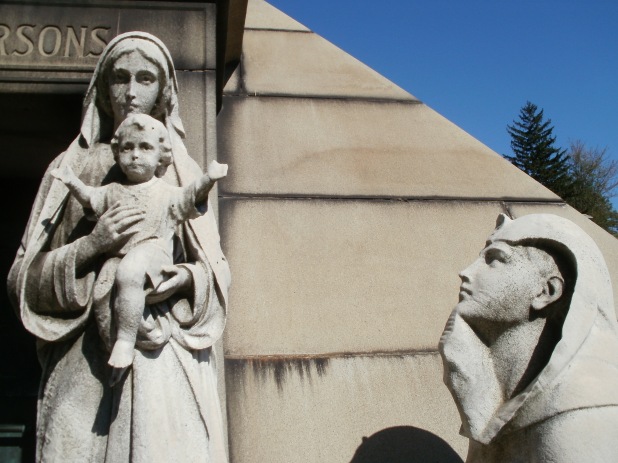 Over the years we have very effectively averted our eyes from death; we love to avoid the topic of death as well as that of illness and old age.  Perhaps there is convenience in this as it allows ourselves to feel ever young and invincible.  However a visit to Green-Wood (or any cemetery) helps to shake loose the taboo nature that death occupies, effectively reeling it in from the periphery of our experience of daily life.  On a recent trip with my son and girlfriend we meandered through the beautiful grounds of Green-Wood observing the memorialized names of those who are no more.  The comparatively young age at which many of Green-Wood’s residents passed away- at least a third of the grave we saw that day were those of young children or young women who died in child-birth, is particularly striking.  As one would expect to find, there is a wide variety of ages and cultural back grounds represented, further demonstrating with basic simplicity the fact that death does not discriminate.

It is easy to gloss over the recognition of impermanence that the Buddha came to recognize so early in his spiritual quest.  The realization that all beings are subject to birth, sickness, old-age and death serve as the core existential foundation-stone upon which the rest of Buddhism in all of its forms is based.  Perhaps over time this can seem to feel a little stale, as just as in his day when the Buddha was still Prince Siddhartha, we are so adept at hiding sickness, old age and death from our immediate view; death and even illness for that matter has become somewhat abstracted, and aging is something that we are told by media to avoid as best as possible.  Talk about suffering!  Nevertheless, we are born, we will experience illness, most of us will experience old age, and all of us will experience death- there’s no real hiding this fact.  However there is joy to be had, and this joy can be found when coming to terms that these profound events affect everyone, that we are all linked together by these similar existential events, and there is a certain beauty in knowing that not only are we not alone, but we are surrounded by countless other beings who share similar existential circumstances.

Earlier today I went to Green-Wood cemetery to practice Chod.  I went because I had the day off and it felt like a personally meaningful means through which I could resolve a certain anxiety that I felt regarding my upcoming clinical placement at New York Presbyterian Cornell-Weill as a chaplain-intern.  It’s a new beginning for me- one that I would like to approach in a thoughtful and centered manner.  Chod is an amazing form of meditation that was developed by Machig Labdron, a female Tibetan Buddhist master who lived in twelfth century Tibet.   As a child she was precocious, and grew up to become an accomplished yogini who, in formulating the meditation practice known as Chod, yoked prajnaparamita literature with elements of tantric Buddhism into a system of meditation that has the unique reputation as the only dharma that was formulated in Tibet and then spread southwards into India.  As the inspiration behind the synthesis of Chod lays within both the Mahayana tradition (through the prajnaparamita sutra, or the perfection of wisdom sutra) and aspects of Vajrayana (tantric Buddhist practice, most notably the practice of Vajravarahi), it is a very well balanced and multifaceted practice.  Indeed, Chod can be approached as a complete path.

Traditionally Chod was practiced in charnel grounds and other fear inducing sites.  Such sites were common in India and Tibet as many mountain passes, cross-roads, trees, and other sites were thought to be inhabited by malevolent spirit beings.  Charnel grounds in particular were regarded as frightful not only because one commonly found bodies in various states of decay and decomposition, but because wild scavenging animals were easily found feasting on human remains.  They are excellent places to face your fears.  In fact, it is said that the Buddha had instructed many of his students to go to charnel grounds in order to contemplate impermanence amidst the decaying bodies of other humans.

Needless to say, such places aren’t really easy to find here in 21st century America- so, one has to be creative.  Some of the beauty of Green-Wood lies in the fact that many of the grave markers are themselves quite old.  Marble doesn’t hold up to elements as well as granite and other masonry material- it is soft and as it ages it slowly wastes away leaving eerie images behind.  Some marble grave markers become hard to read thereby reinforcing the point that this is a place where people are left with very few to continue to witness the fact that they were ever there.  Even the stone memorial markers are subject to impermanence.

One of the central features of Chod is the practice of visualizing that one chops oneself into pieces that then form an offering.  We slice off our skin and chop up our body, remove the organs, cut out the eyes, perhaps smash the skull,  and allow the marrow to slowly flow.  In varying configurations we offer this mandala offering to all of the Buddhas, our lineage masters, dakinis and the wisdom protectors as well as to our own personal demons that represent our fears, our attachments, our insecurities, as well as to local gods, demons and spirits, as they too need care.  In essence, we offer every aspect of the matrix of our being to all other beings that we can conceive of, what remains is liberated Buddha-essence: non-referential and timeless.  It is a means of dramatically looking at where and what the “me” that we constantly tend to self identify with actually is.  It’s also a means of facing the attachment that we all too naturally tend to develop towards our bodies, our personalities, and other ways in which we self-identify as independently existing entities. 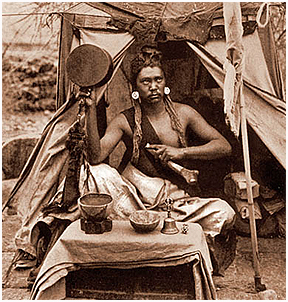 What was striking today after having made a certain ruckus in the cemetery with my chod drum, bell and thigh-bone horn as any good chodpa is willing to do, is that just sitting in a state of open reflection of the impermanence of life while at Green-Wood is particularly profound.  It became evident that one need not only do Chod to necessarily feel the supportive reminder of how fragile and relatively short this life of ours may be.  The contemplation of  impermanence as well as the Four Noble Truths in a cemetery is a wonderful way to find freshness in the joyously simple truths-by-extension that flow effortlessly from such meditations.  In fact, I was left with the feeling that we need more cemetery practice- more excitement.  There are many places that tend to be avoided or simply glossed over that occupy great seats of power as places through which we can challenge and confront those things that are inconvenient.