This post is intended to address the disturbing reactions to the Islamic cultural center that is proposed to be built near the world trade center site.  The anger and “islamaphobia” that has arisen as a result of the proposal to build the center acts as a direct challenge to the ideals that America as a nation ideally represents.  That some New Yorkers are participating in the protests and exhibitions of intolerance seems provincial and pedestrian given the fact that they live in what is an international city, home to people from countries all over the globe, who in turn represent and practice a wide variety of the world’s faiths.  Needless to say, the intensity of these reactions seem to be based upon fear of difference and or fear of the unknown.

Despite my own personal feelings on this issue, I thought that this is the perfect time to share a picture I took at an exhibition of Indian Sufi art titled Light of the Sufis: The Mystical Arts of Islam that was held at the Brooklyn Museum of Art from June to September of 2009. 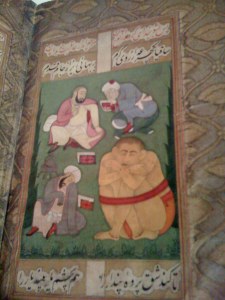 The painting depicts three sufi mendicants and one Buddhist yogin (practicing what I would assume is a Vajrayana completion-stage yoga based upon his asana as well as the use of the meditation belt). Even though the exhibition gave very little information regarding the subject of the painting, the moment I saw the portly yogin I was convinced that an interfaith meeting of some sort was underway.

I brought this image with me to India to show H.E. Gyaltsab Rinpoche as he has a passionate interest in history, especially regarding the overlap between Buddhism and Islam.  By most accounts Vajrayana (tantric Buddhism) was born somewhere in or around the Swat Valley in northern Pakistan.   Other portions of Pakistan, Afghanistan, and northern Central Asia figure largely in the development and dissemination of tantric Buddhism.  Many great buddhist teachers spent time in this region- generally refered to as Uddiyana.  Such illustrious figures include the Mahasiddhas Tilopa and Kambala, and more recently Orgyen Rinchen Pal (1230-1309 CE) who brought to Tibet a unique system of meditation based upon the Kalachakra Tantra.  It is also said that Padmasambhava (Guru Rinpoche) was said to be born somewhere within the Swat valley- the same valley that over the past year has seen terrible devastation in relation to the war in Afghanistan. 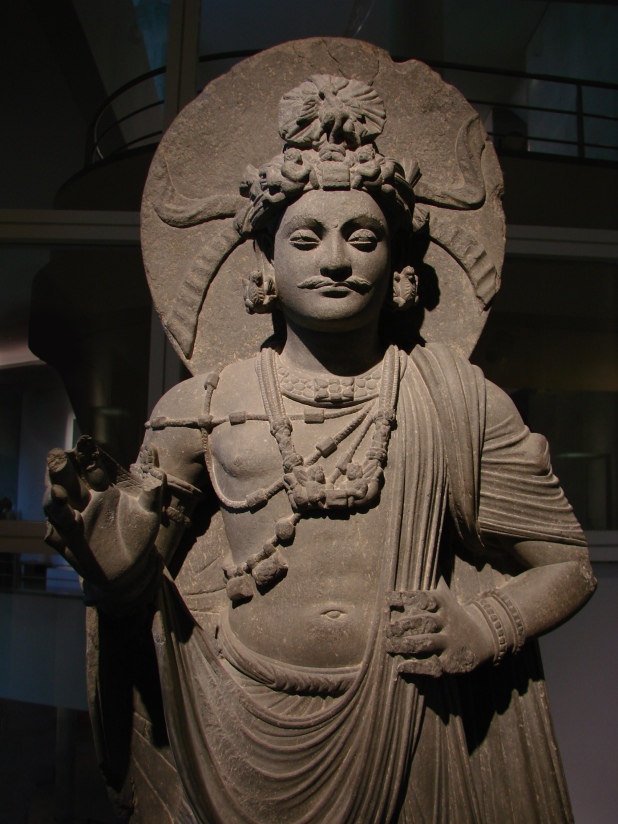 In response to the photo of the painting that I brought,  H.E. Gyaltsab Rinpoche told me the story of a Buddhist teacher who was described in a historical treatise by Gendun Chophel.  There was once a yogin (Rinpoche never gave the name) who wandered through Afghanistan and some of what is now Iran, and after some time started to teach.  According to Rinpoche, this very realized teacher interchanged Buddhist philosophical terms such as Dharmakaya and nature-of-mind with Allah when he taught as a means to appeal to his audience.  The sensitivity and depth of his teachings were eventually recognized by an elder Sufi teacher who came to name this Buddhist as his successor.  When the elder teacher passed away, this Buddhist teacher took over teaching the sufi congregation and when he in turn passed away was eventually recognized as a great Muslim saint.  It seems that the attachment to Buddhist dharma or Islamic dharma wasn’t an issue for this great and now unfortunately relatively forgotten teacher; the play of appearance was a means to express something beyond any particular cultural reference.

I am reminded of the story of Taranatha and one of his teachers named Buddhaguptanatha. Buddhaguptanatha (1514-1610? CE) was an Indian Buddhist yogin who also held and practiced several Hindu yogic traditions.  Taranatha apparently discovered this fact while Buddhaguptanatha was in the midst of bestowing a series of empowerments that he himself  had received from his guru, Shantigupta. Taranatha was particularly challenged by the idea that his teacher also practiced Hinduism.  Sensing his student’s sectarian reaction Buddhaguptanatha became upset and abruptly left Tibet leaving the series of empowerments incomplete.  It is humbling that even for a teacher as great as Taranatha, the notion of “pure” Buddhism being mixed with Hinduism was a challenge- that on some level his own sense of distinction got the better of him.  It seems that as Buddhists we must be willing to let go of the “Buddhism” in the Dharma- relaxing into appearance as it comes.  However, maybe this isn’t something that just Buddhists should try to do- what if we just let appearances arise and not be too concerned with their comparative characteristics? 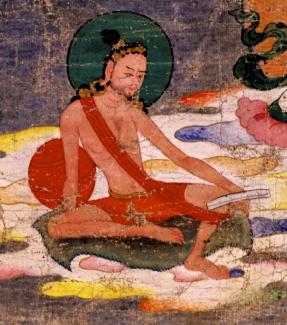 From the standpoint of meditation I am particularly fascinated by how we naturally fall back into habits based upon the conception of time and definitions.  There is a certain convenience to viewing the world in terms of borders, of ideas as separate and in contrast to one another, and of faiths as distinct and at odds with one another.  However, when we really look, especially at ourselves and the way we interact with things around us, the sense of separation isn’t as distinct.  When we allow ourselves to slip out of the me/mine self/other dynamic, things blend together in a way where perhaps all the distinctions become unnecessary and overly unimportant- or at the very least, less distinct.  Appearance just is, and need not be elaborated upon.

Now might be a good time to examine just how and why we react so strongly against the things that disturb us; the things that cause fear are often not fully seen for what they truly are.