on pacifying, enriching, magnetizing and subjugating… 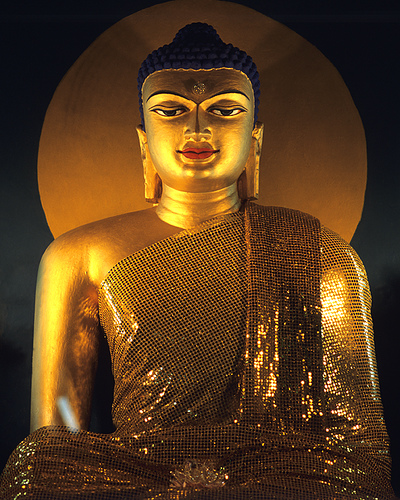 I recently attended a long weekend retreat on the Five Remembrances held by the New York Zen Center for Contemplative Care.  It was wonderful to have time at the Garrison Institute to reflect upon these five essential points:

I am of the nature to experience old age, I cannot escape old age.

I am of the nature to experience illness, I cannot escape illness.

I am of the nature to experience death, I cannot escape death.

I am of the nature to experience loss of all that is dear to me, I cannot escape loss.

I am the owner of my actions.  They are the ground of my being, whatever actions I perform, for good or ill, I will become their heir.

The Buddha’s discourse on the Five Remembrances resembles the realization that young Prince Siddhartha had concerning his recognition that we are all subject to birth, sickness, old age, death, and all of the forms of suffering associated with each phase of our existence.  In the reading of the sutta by Kamala Masters, the Buddha points out that the first four Remembrances serve us well to return our focus onto the primacy of impermanence; doing so is a remedy towards arrogance, over-confidence, and conceit.

I will become sick.  I will become old.  I will experience loss.  I will die.  There is nothing that I can do to change this.  When that happens, as this whole existence plays out, my only companion who remains with me throughout is the collection of my actions.

The Fifth Remembrance, which relates to our actions, the quality of our actions, or karma, colors the experience of each facet of our being.  It can be the root of our liberation, or the hard kernel from which our suffering manifests.  I’d like to take a moment to explore the Fifth remembrance, our actions, in a general sense and then look a little more specifically at action from the Vajrayana buddhist perspective, especially as it relates to actions of pacifying, enriching, magnetizing and subjugating.

Action, movement, friction, trajectories, potential energies.  These can easily refer to different forces and dynamics involved within the study of physics, which at close glance looks like a wonderful symbolic structure parallel to aspects of Buddhism, and yet as qualities they easily also connect to our behavior.  Our behavior is composed of reactions or responses to the events around us, how we see the play of phenomena unfold before our very eyes.  The quality of our perspective acts to determine the flavor of our actions, and the quality of our actions affects the continuum of our perspective.  The more self-involved our perspective is, the more our actions involve the preservation and protection of self interests.  The more we act to preserve and protect self-interests, the more easily we may think that others or events may be hindering our self-interests.  Likewise, a more expansive perspective affords us the ability to act in a more expansive way.  When we act with a larger concern for others’ well being, our ability to see the interrelatedness of self and other allows more clarity and more peace.

As we pass through this life, a conditioned existence that has been flavored by past events, the habits of reacting to the display of phenomena around us (our daily lives) often become stronger and more ridgid.   The phrase goes: Actions speak louder than words.  This seems right, but it’s amazing how we use thousands of words to hide or cover up and beautify our actions.  Such elaborate verbal adornments so that we can feel okay about how we are right now.

The above image is that of Senge Dradrok, or Lion’s Roar, one of the eight manifestations of Guru Rinpoche.  Guru Rinpoche took this form in Bodh Gaya when he came to debate and challenge a group of five hundred non-Buddhist teachers who were trying to disprove the Buddha’s teachings.  Guru Rinpoche won the debate and “liberated” all of them with a bolt of lightening- most of the village where the non-buddhists were staying was destroyed, those who survived became converts to Buddhism.  This type of story is not so unique.  The life story of the Mahasiddha Virupa and many others contain descriptions of such events- they are powerful descriptions of activities that certainly appear to run counter to the typical notion of what buddhist behavior is thought to be.  This energy of wrathful subjugation, while not generally an everyday occurrence has it’s place- this hot humid searing energy is needed from time to time to remove impediments towards our spiritual growth.

How can we touch the quality of Senge Dradrok within ourselves?  What does it feel like to be him, or Mahakala, Vajrakilya, or Palden Lhamo?  What is the focus of these energies?  How can we completely liberate the hundreds on non-dharmic impulses within us like Senge Dradrok? 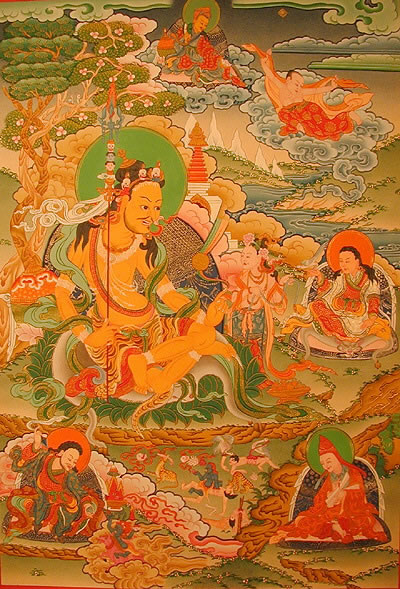 In another form, that of Nyima Ozer, or Radiant Sun, Guru Rinpoche displayed himself as Saraha, Dombi Heruka, Virupa, and Krishnacharya, some of the most well-known Indian proponents of tantric Buddhism.  While in this form Guru Rinpoche spent time in the eight great charnel grounds and taught Secret Mantra (tantric Buddhism) to the dakinis, while binding outer gods as protectors of his secret teachings.  This is an act of magnetizing, drawing towards him the dakinis and protectors of his treasured teachings, spreading the dharma in the form of may important masters.  In the form of a tantric master his intensity and use of whatever arises as a teaching tool captures the great energy deeply-seated within through which magnetizing activity becomes manifest.  It seems that essential to the quality of magnetizing is the general awareness of skillful means; knowing just when to act in a way to be of the most benefit in any given situation. 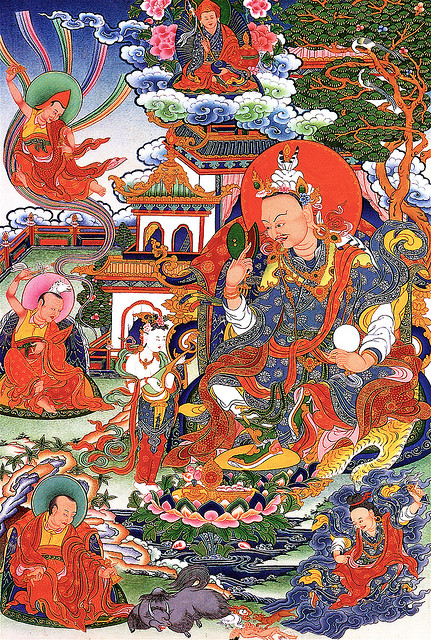 Yet another activity form of Guru Rinpoche appears as Pema Gyalpo, or Lotus King.  In the form of Pema Gyalpo, Guru Rinpoche taught the inhabitants Oddiyana the Dharma as he manifested as the chief spiritual advisor for the King of Oddiyana.  His selfless dedication and compassionate timely teaching activity enriched all who came into contact with Pema Gyalpo such that they became awareness-holders in their own right.  This enriching activity has untold benefits; the effects of the nurturing support that Pema Gyalpo displayed through his teaching activity caused an incredible expansion of the Dharma in Oddiyana.

This final image is of Guru Rinpoche as himself, who among most Himalayan Buddhists is considered the second Buddha in the sense that he is credited with bringing Buddhism to Tibet.  While he wasn’t technically the first, he was the first to introduce tantric Buddhism in a way that took hold, and is credited with helping to construct the first Buddhist monastery in Tibet.  A dynamic teacher, Guru Rinpoche embodied all of the qualities of his eight manifestations and countless others.  Through the expression of his life Guru Rinpoche was able to display pacification, enriching, magnetizing, and subjugation both in Oddiyana, India, Bhutan, Tibet, and even now.

Within tantric Buddhist literature we often find references to the importance of adopting the behavioral modalities of pacifying, enriching, magnetizing, and subjugating as illustrated by the eight manifestations of Guru Rinpoche.  These activities were seen as extremely important as they pertain to embodying the qualities of a variety of tantric buddhas as well as the essence of Buddhahood in all emotions. Furthermore, they are utilitarian activities, they support and enrich and massage us as we travel the path of enlightenment.  References to these activities can be found in the translations of various tantric texts by a variety of outstanding Buddhist scholars such as David Snellgrove, David B. Gray, Christian K. Wedemeyer, and Vesna A. Wallace to name a few.  One can also rely upon the namthars (liberation stories) of many Indian and Himalayan Buddhist Siddhas to feel the range of possible human action on both inner and outer levels of being.  Finally, our practice sadhanas contain a wealth of wisdom and guidance- the words in sadhanas are not arbitrary- and they often capture with great clarity the essence of dharma being.

We are aging.  We will experience illness.  We will die.  We will experience loss.  Our actions are our ground and we are the owners of our actions.  That this is the case is undeniable.  We cannot change the first five certainties, but we can change our actions.  Our actions, and the related ability to perceive, directly determine how we relate qualitatively towards aging, illness, death, and impermanence.  Let’s apply the depth and range of possibilities as exemplified by Guru Rinpoche and other Buddhist Siddhas- lets refine, strengthen, expand, and deepen our relationships with ourselves, with the world around us and with our experience of mind.  We are completely capable of manifesting in this way- it doesn’t matter if we wish to embody Tilopa, Virupa, Tsongkhapa, Taranatha, Machik Labron, or Garab Dorje, we are all capable of touching their essential being.  No one can do this for us.  At the end, as we lay dying, who can really blame for our shortcomings?