Later today I am leaving for a six week trip to India.  I will be heading out to see His Eminence Gyaltsap Rinpoche, at either Rumtek or Ralang monasteries. 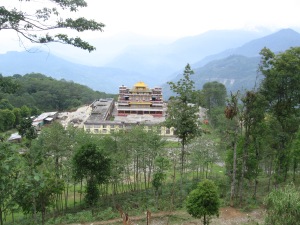 There may be the opportunity to also meet with Bhue Rinpoche.  In addition to receiving further instruction, spending time in retreat, and pilgrimage, I look forward to discussing changchub.com (http://www.changchub.com) with Gyaltsab Rinpoche.  Hopefully I will be able to secure an interview with His Eminence for the blog.  Additionally, I’d like to see if I can add Akshobya practice to the list of practices that are offered through changchub.com.  The practice of the Buddha Akshobya is one of the most well known means for purification of those who have passed away; it’s particularly effective in resolving the occurrence of anger at the point of death, and allows for a peaceful solid passing through the bardo.  I had the wonderful opportunity to receive instruction on the practice from His Eminence in Bodh Gaya in 2007- and hope to see it added to the website.

During this six week period, I’ll also be thinking of a variety of ways to open up the blog a bit- about ways to include other voices and other perspectives.  I friend of mine recently got in touch with me and suggested that we create a council of blog contributors.  I’ll spend some time in rainy monsoon Sikkim considering how best to make that happen.

It will be nice to have the opportunity to engage in slowing down, taking time to quiet the mind, and deepen practice.  It is such a good thing to break the habits of daily business and preoccupations to remind ourselves of everything else, of all of the “ordinary” things that we tend to over-look as we zoom from here to there like busy bees.

Until the beginning of August, I wish you all the best.