hinayana of the mind 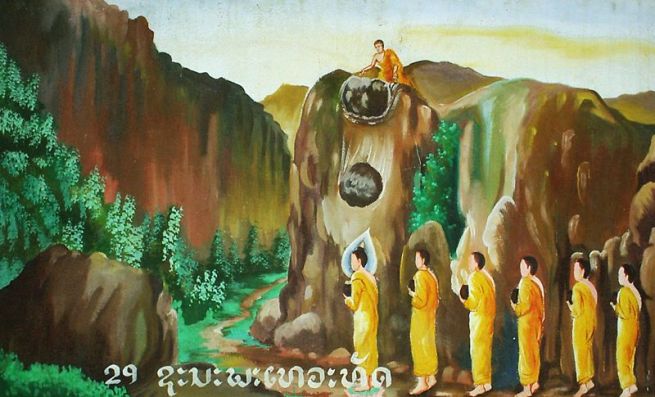 Recently I was reading the introduction to the recent translation of books nine and ten of Jamgon Kongtrul Lodro Thaye’s Treasury of Knowledge, entitled Journey and Goal, by Richard Barron (Chokyi Nyima).  While reading, I came across a wonderful discussion of the topic of “paths and levels” (Tibetan: sa lam).

For whatever reason, be it cultural or philosophical, or a need to act as an extension of the phenom that was Indic scholasticism, many early Tibetan scholars/translators placed great energy into codifying all of the various routes taken by the three Buddhist vehicles.  Of equal interest to Tibetan scholars/translators were the various the road-maps provided by the lineages that comprised these vehicles. Indeed, lam rim (stages and paths) literature from Jey Gampopa onwards, for example, has functioned as a great cornerstone for the practice of dharma up to this very day.  Rest assured that if you are ever lost on the path to enlightenment, the Tibetans have all the various maps you may need neatly organized.

What was of great note for me was Richard Barron’s exploration of the term Hinayana in his introduction to the translation of Kongtrul’s text.

According to most descriptions, the three buddhist vehicles are delineated as: Theravada (Pali: थेरवाद), Mahayana (Sanskrit: महायान), and Vajrayana (Sanskrit: वज्रयान).  The histories and unique wealth that all three vehicles contain is obviously too vast for this blog, and therefore I enthusiastically encourage exploring the expansive richness that these buddhist traditions continue to offer the world.  For now, I would like to explore further hinayana of the mind.

The term Hinayana (हीनयान) translates a “deficient vehicle”, or “defective vehicle”.  It arose as a derogatory term after the development of the Mahayana view to denigrate and belittle self-centered practice of dharma, not necessarily as a criticism of the Theravada approach.  Indeed, that it arose post facto is significant in that it was used to distinguish Mahayana from some aspects of an earlier approach to Buddhist practice.  It should be noted that this earlier form or approach to practice that was being criticized was that of the Sarvastivada school (an eternalist belief that “all exists”) and similar groups.  Over time it became somewhat common to erroniously regard Theravada Buddhism as Hinayana.

That said, people are people are people, and Buddhists are no different; the chauvinism of some Mahayana practitioners towards practitioners of the Theravada approach resulted in harsh belittling of a legitimate and praiseworthy dharma.  Indeed, this shows how easily the kleshas of greed, hatred and delusion, the very roots of our suffering, can be used to debase and belittle others in such a way that we easily poison our internal well-spring of basic goodness.  Perhaps this is the intended meaning of hinayana; perhaps this is how we manifest the hinayana of our own minds.  How we become deficient or defective.

The late Chogyam Trungpa Rinpoche once said that even the most precious and extraordinary tantric practices can become hinayana practice if our motivation is confused.  If we become focused upon self-aggrandizing, self-enrichment, self-liberation, and pious aggression, what good is our practice?  How easy it is to become an inner Devadatta towards our own pure motivation; to become stricken with a tight and closed approach towards others.

The great yogin and Kagyu forefather, Jetsun Milarepa, once said that staying in the house of someone who practices with hinayana motivation is akin to accumulating seven lifetimes of misdeeds. Milarepa seems to be saying that even loose peripheral association with the hinayana perspective can lead to great downfall, I can’t imagine that he was referring to the ill effects of accepting the generosity of receiving shelter from a Theravadin buddhist.

How does this apply to our daily lives?  What impact does it have in chaplaincy?  What does pure motivation mean, and how do we allow the root kleshas of greed, hatred, and delusion (as well as the branch kleshas: conceit, wrong view, doubt, torpor, restlessness, shamelessness and recklessness) constellate with us?  How do these factors cause the growth of hinayana mind?

It is said that fire can be used as a tool; to bring warmth, to cook, and enlighten.  It can also be used to burn and destroy.  How we practice, and especially how we relate to others, as well as the environment, seems to be an especially powerful barometer with which we can measure the relative efficacy of our spiritual path.  To that end, and with that in mind, it seems of vital importance that we remain mindful of the occasional flashes of the hinayana of the mind; how it arises may be different for each of us in terms of specificity, however, I suspect that our inner Devadatta’s are cut from a similar cloth: ego-clinging or self-orientated thinking/separation from others.  Whether it take the form of high lamas causing a rift in the sangha, our own inability to recognize the suffering of others, or even the sometimes subtle belief that we are more unique or special than everyone else, it is easy to fall prey to hinayana mind.

May we totally dispel the neuroses of all beings (including ourselves)!